Citizen Science Voice Demo is a VOGO Voice initiative to demonstrate the potential of voice-enabled smart speakers to drive objectives of collaborative research. Every so often the legwork involved in experimentation costs researchers a surplus investment of time, money, and human resources. Citizen science is aimed to fulfill this lack of resources by allowing scientists to implore citizens to join their cause. The endeavor allows an average person to pitch in their observations as pilot data, through online portals. Citizen Science Voice Demo showcases the effectiveness of initiating survey campaigns to gather such data, through a voice assistant.

In this demo, we deploy an African wildlife classification project as a use-case to demonstrate the ease of accessing and participating in citizen science surveys. The example entails confirming the presence or absence of animals, wildfire, and human traces in the pictures that are sequentially displayed on the screen. A couple of customary questions follow if you do see and signal animal presence. With the intent of minimizing errors of subjective perception, researchers can pool and evaluate responses from multiple users to rule the outcome of the study. Since this is an image-based survey, a device with display functionality is imperative. Nevertheless, the signs, indications, and pattern of questions may vary with each study and survey. What’s constant is the ease with which the veteran scientific community can collaborate with amateur scientists to collect data. Moreover, at a time when the usage of smart speakers is expanding to newer horizons, it paves way for bringing in a whole new base of citizen scientists and strengthening the potential of the community in furthering the mission of collaborative research. The hands-free operation not only broadens the demographics of citizens who can access these campaigns but also makes it relatively time-efficient as opposed to online surveys over a desktop.

If you’re looking to accelerate the progress of your study, voicing your data needs through smart speakers proves relatively promising. Much of the work that goes into organizing the data inputs can be accomplished via the skill. This frees up scientists to primarily focus on analyzing data and achieving high-quality results. 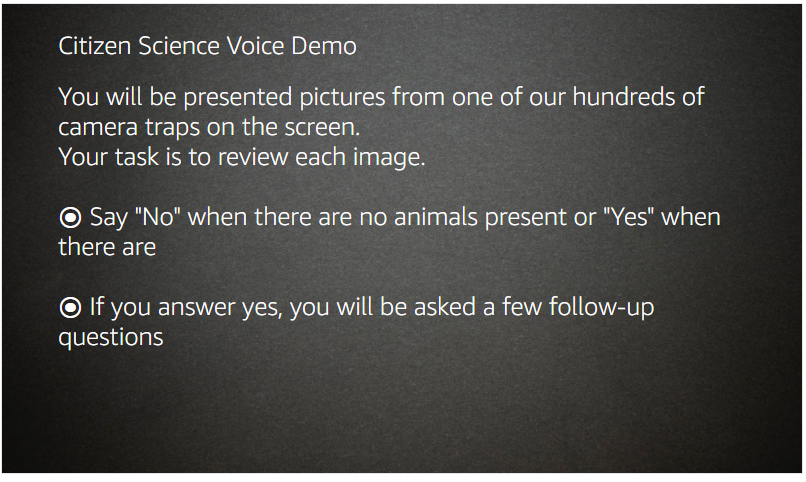 Contact us to learn more about this voice app and see how we can build one to accommodate your requirements.