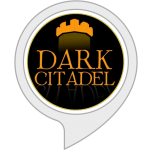 “The kingdom of Alderton is under attack, and you are the only one who can save it!”
This is the central premise that the Alexa skill ‘Dark Citadel’ is based on. Developed by LC Publishing, the episodic game follows a CYOA format and unravels divergent storylines based on the player’s choices. Author and web developer Lincoln Cole made sure to deliver a highly elaborate and intense voice gaming experience by adding over 1000 unique sound effects, 23 chapters, and all standard elements of an RPG to the mix. Be ready to be tossed into a labyrinth of branching paths full of mystical creatures, monsters, and of course, Dungeons.

Like all RPG games, your primary task is to level up your character by adding to its capabilities and preparing it for upcoming quests. The more you interact with the world projected in the gameplay and combat enemies, you can unlock races, classes, stats, powers, etc. to upskill. Every other ordinary appeal of a quest-based game like collecting gold items, artifacts, and XP points is well preserved. The game also comes with a leaderboard feature to compare the ranks of other players. Additionally, an optional chat system allows players to communicate and connect with other explorers in real-time. Outlining the mission in the skill store description and not within the skill may have deprived the game of a much-needed thrill. The narrative however is rich and descriptive to draw the player into the vivid landscape of the game. For all intents and purposes, the concept is geared towards seasoned gamers familiar with the ropes of navigating game realms. Absolute beginners will need to go through a learning curve before they can grasp how to seamlessly traverse the world.

The basic functionalities of an Alexa skill, including resume, repeat, and help are retained by the game. The help aids players to access commands, rules, tutorials, perks, recommendations, etc. The limitation of the repeat feature is that it mostly only repeats the question that the user needs to answer to move further. The narrative preceding the question may not be repeated every time. An extensive list of sub-options may overwhelm first-time users. The visual experience is often crammed over smaller devices like the Echo Show. Although switching to an Alexa device with a larger screen will definitely help players benefit from troves of available information.

The VOGO Voice team scores this skill a 4.6 out of 5-stars based on our review criteria. ‘All in all Dark Citadel offers an intense voice gaming experience for RPG buffs. For someone who is new to the concept, this could be a place to start.