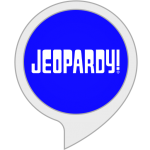 Jeopardy, the Alexa game skill that comes with premium content has been developed by Sony Pictures Television. This voice skill has been specially curated for users who want to sharpen their knowledge and perhaps even go a step ahead in challenging themselves with a nerve tickling quiz. Engaging the jeopardy fans to the fullest, the voice app sure seems dedicated to creating instant fun among its players. The brain-teasing, knowledge testing gameplay imitates the true Jeopardy! experience for the users as it is for the contestants on the show.

The brain booster quizzing which offers five clues a day is noted among its players as the King of Trivia. The voice app tests the knowledge of users spanning a wide range of categories including sports, pop culture, travel, world history, and lots more. Players who are thrilled to get a feel of stepping up to the podium can experience the excitement by choosing to play the game daily or as they wish in a group or individually. That being so, not every player may feel as involved as being in the game show itself. No matter the motive, the gameplay does let the users learn something new every day. The reverse approach in this game is the fun part which is nothing but giving answers in the form of questions based on the clue that is provided. What’s more, is that the players are guided with ease and hence the conversation proceeds smoothly. There’s more, users are offered team jeopardy on Saturdays and sports jeopardy on Sundays to add to their playtime.

The VOGO Voice team scores this skill a 5 out of 5-stars based on our review criteria. Yet, you’ll have to try for yourself and see if it lets you run into the exhilarating moment you have been wanting to experience by playing this popular Jeopardy! skill and whether it checks all the boxes of thoroughly engaging you just as you had anticipated.