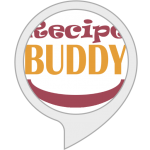 Recipe Buddy, by APPX is an Alexa skill, mainly aimed at helping you cook, on the go. The skill provides real-time instructions to thousands of dishes, ranging from everyday snacks to exquisite gourmet. Upon choosing a recipe, you may either go over the list of ingredients first or dive right into cooking, although the former is highly recommended to avoid the hassle of hunting for items when following instructions. The ingredients option lists all the components of the recipe alongside the measure following which Alexa guides you through the recipe step by step. Due to the limitation in session time, you do run the risk of repeated session timeouts. This may come as a major inconvenience given that long lags of silence are inevitable when you are following instructions in real-time. At that point, all you need to do is revisit the skill and it will resume the recipe from the same step.

Some of the commands that allow you to navigate the skill are “next step” to progress further, “repeat” to back up a step, and “start over” to check out a new recipe altogether. The skill has a modest display which may diminish the overall experience for devices like Echo Show. Another factor that further drives down the usability of the skill is its inability to process common user requests. Instead of comprehending the command, the skill tends to repeat the question or just moves on to the next step if it’s in the middle of dispensing instructions.

At times when culinary skills are breaking the mold to elevate user experience, the limitations of Recipe Buddy become way too obvious. Upgrading the functionality of the skill to prevent it from exiting during instructions will definitely rake in a few points on the usability side. On the plus side, you need not worry about fiddling with your gadgets while you are hands-deep in cookie dough. Although, downplaying request handling and aesthetics of the display may cost the skill heavily in terms of popularity within its niche.

The VOGO Voice team scores this skill a 3.3 out of 5-stars based on our rating system. All in all the skill has the ability to ease amateurs with coherent instructions so they can add some fancy dishes to their profile. With fair upgrades to the features and a few tweaks to hash out an appealing display, the skill has the potential to be called a rank cooking coach. For those who pick up aprons for soothing their stress, this might be a great avenue to facilitate therapeutic cooking activities and add to the list of culinary accomplishments.