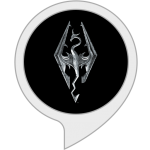 Skyrim Very Special Edition is an Alexa-driven adventure game developed by Bethesda Game Studios. This special edition skill emulates the bygone text-based role-playing computer game from the late 1970s and early 80s. It is an equivalent version of Skyrim that presents users with the hand-picked opportunity to step into the illusory world and take the rightful place of Dragonborn of legend.

Players, as they step foot into the gameplay are invited to explore the dungeons of Skyrim using the power of their voice. At the very outset, the makers of this voice app have clearly rated the content as mature. Users are asked to choose from one of three pathways to progress with the game. Also, it is based on the user’s choices that the direction of the outcome is determined. As the players set forward, in tune with the narrative, they are to confront their enemies and battle them out in amusing ways by using weapons, spells, shouts, or by simply fleeing. Another key highlight is that each time the players use a weapon or a shout, the related capabilities level up. Similarly, they can leverage the feature of checking their adventurer’s health status to assess the damage suffered, for which, all they got to ask is “what’s my health?” at any point. The resourceful ‘Help’ section further offers the requisite guidelines for players to choose the paths and meet the expected progress. The option to repeat aids them replay the questions to gain clarity. All the more, the ability to resume the game from where one left off is a boon for players to keep their spirits up and continue at a steady pace. Therefore, it can be assessed that the skill efficiently guides the user throughout the conversation without any hiccups. Well, that being said, there seem to be a few downsides that could let down the players at times. One of the downers is the monotony that surfaces, at times, especially when the gaming follows a repetitive nature of battling the enemy. Additionally, the gameplay void of sound effects is yet another downside, the presence of which could have contributed to elevating the overall user experience.

VOGO Voice scores this skill 4.5 out of 5 stars based on our rating system. Yet, you’ll have to try it for yourself and see if it’s an electrifying gaming voice app that will keep you engaged and entertained throughout. To make the most of what the skill has to offer, resort to the help feature and keep a tab on your health status to step up the game and wield power over the growing row of enemies. So why not explore Skyrim Very Special Edition and see if it offers the alluring experience you had anticipated.