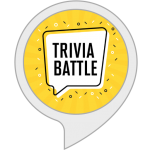 Trivia Battle is a voice skill cleverly crafted by Voice Games. It is a trivia game where the players try to get their state climb the leaderboard faster. This interactive skill is suited for players who want to get in the grip of anything but boredom. Suffused with an interesting challenge to get their state to the top of the leaderboard and reach the top 250, forms the crux of the skill. This voice app seems to be uniquely developed with elements concocted in such a manner that its players feel inspired to play it daily and garner as many points as possible.

Enticing its users to keep coming back to play 8 questions a day is one of the few factors that create an inexplicable rush of excitement in its players. But, if there is an unquenchable longing to play more, then there sure seems to be a way for the most inquisitive of players. For those players who want to go beyond the 8 questions will have to join the Trivia Club. By joining, they get 5 bonus questions with each question worth double the points. Also, the trivia battle skill nudges the players to earn points both individually and for their state. To serve this purpose the entire gameplay comes with engaging point gamification features to drive interest among its players to hoard points for their personal standing as well as region-wise to outpace other individuals and states on the leaderboard. The challenging questions they toss range across history, science, math, sports, general knowledge, entertainment, etc. All the more, this fun and knowledge booster gameplay intuitively handles the conversation especially when the user is out of response. That being said, there are a few downsides that made it to the list such as the game being curbed at 8 questions a day even though it comes with the privilege to join Trivia Club with the other being; a few instances when the skill fails to recognize the user’s response.

The VOGO Voice team scores this skill a 4.75 out of 5-stars based on our review criteria. Yet, you’ll have to try for yourself and see if it is truly entertaining in nature and if it is worth the battle to get your state to the top of the smartness leaderboard