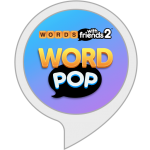 Word Pop is a fun and challenging English vocab skill developed by the Zynga game network. The skill is a whole new spin on the classic word scramble game for vocab enthusiasts.

In this game, players are supposed to find and generate as many words as possible from a letter bank with 6 scrambled letters before the one-minute timer runs out; the faster they form words, the better the prospects to win the game. The words guessed could vary from a three-letter to a six-letter word, where they may be either pronounced or spelled. Points are awarded to users depending on the number and length of words they discover. In short, longer words will help them fetch higher scores. The main highlight of the skill is that it offers specially curated features addressing both Echo Dot and Echo Show users for a better game experience. For those who rely on Echo Dot, there are separate commands to repeat the set of scrambled letters and also replay the list of words guessed. While playing on the Echo Show, users get to see their letter bank along with the words formed and a ticking countdown timer. Additionally, they can also shuffle their letter tiles to guess more words.

The skill provides an opportunity for players of all ages to enrich their vocabulary. It doesn’t matter if you’re a beginner or a vocabulary master—be it any level, this game is for you. The rules are quite straightforward, and it starts easy at first but gets more challenging as you progress further. The game level solely depends on the user’s score. Word Pop’s creators focused mostly on providing their players with the nostalgia of their “Words with Friends game” together with delivering a novel smart speaker experience. That being said, a few downsides were also noted while reviewing the skill. The first of it is that at times it misinterprets user responses; there is often trouble with word recognition. Another one being, some instances where Alexa’s responses are simply repeated irrespective of the user’s verbal commands.

The VOGO Voice team scores this skill a 4.4 out of 5-stars based on our review criteria. The word scramble enthusiasts will love this puzzle-solving experience on their devices, as the skill comes from a well-known smartphone game developer with their fresh content. If you are into word puzzle games, then this is a good game to try.