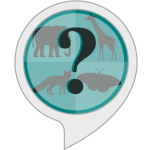 Animal Guessing Game is an interactive edu-entertainment voice skill developed by Thornton to attract both kids and adults alike. To spark the curiosity of little ones, the skill renders a well-rounded description of animals supported by visuals, one at a time, based on which listeners ought to make the right guess. The voice application seems specially curated to impart knowledge with an interesting proportion of fun.

Hoping to elicit and elevate players’ curiosity, the voice skill offers an in-skill purchasing of Animal Facts Package. The crux of this pack is grounded on the initiative to enlighten avid minds with facts about the animals guessed. Another highlight worth mentioning is that the voice app offers three levels of difficulty, namely easy, medium and hard which the players can choose based on their learning interests and needs. The hard level of the gameplay appears to suit grown-up minds, nevertheless, kids who are up for a challenge will enjoy this brain-racking level. The generous 4 chances players have at their disposal to make the right guess acts as a key motivator. Once all the four chances are exhausted, the skill gives the correct name of the animal. To add to the perks, if the player gives 3 incorrect guesses consecutively, a useful hint will be provided, mostly the initial letter of the name of the animal, to continue playing. Well, that being said, there seem to be a few downsides that could let down the players at times. One of the downers is that the option to repeat performs in a rather inconsistent manner at certain instances of the conversation. Besides that, the skill, at times, fails to effectively take the conversation forward without any hiccups. Another let-down is that the player is asked to choose the level of difficulty after each question, which could turn out to be exhausting. At random instances, Alexa interprets the user’s spoken commands as guesses and declares them as ‘incorrect’, all in all, causing players to feel slightly disappointed. Last but not least, the voice application is deprived of gamification features, thereby leaving no room for players to feel motivated to accrue scores and keep playing against all odds.

The VOGO Voice team scores this skill 4.4 out of 5 stars based on our rating system. Yet, you’ll have to try for yourself and see if it is a truly engaging voice app that will enable your kids to have some fun while being edified playing the game to their heart’s content. Bear in mind to actively listen to the descriptions and hints provided so as the guess correctly the name of the suggested animals. So why not try out the skill and see if it offers your kids an enriching, knowledge-driven experience as you had anticipated.