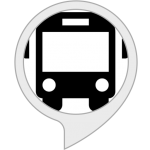 Portland Bus is a voice app uniquely developed by David Merrick for the benefit of commuters on the go. The Alexa-powered app is designed to deliver real-time transit timings of bus arrivals across various stops in Portland, Oregon. It attempts to ease the tension of travelers by keeping them informed upon request so as to help them make it to the stops on time.

One of the significant highlights of this voice app is that it allows users to save their preferred bus stop, thereby extending to commuters a key factor of convenience that they can make the most of. To obtain details of the bus, users have to specifically mention the bus stop code. Additionally, the skill covers most of the stops in Portland thereby offering its service to a wider range of travelers. Well, that being said, there seem to be a few downsides that could let down the users at times. One of the downsides is that the skill abruptly stops soon after responding to the user’s request. Consequently, users are left with no other option but to revisit the skill several times when pressed with the need to find out the arrival times for other stops or for related queries. Though the voice app offers the provision to save the preferred stop, it doesn’t use that piece of information to render a personalized experience the next time the user revisits the skill. In other words, based on the user’s selected bus stop the skill does not automatically relay updates. So, the only way to receive this detail is by resorting to the spoken request that reads, “give me the arrival updates at my stop”. All the more, the app does not allow to save more than one stop which is a bit of a downer. The skill also fails to support basic commands like ‘Help’ and ‘Repeat’, and with no help section to recourse to, users are left on their own when it comes to navigating the skill to ferret out the requisite details, especially in the hour of need.

The VOGO Voice team scores this skill 3.6 out of 5 stars based on our rating system. Yet, you’ll have to try for yourself and see how useful and timely the transit updates for your chosen bus stops in Portland, Oregon are. Bear in mind to visit the Alexa Skills store to know more about how the skill works. So why not try out the skill and see if it offers real-time information that is handy while caught up in a flurry of commute to and fro.