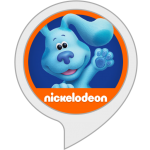 Blue’s Clues & You! Listen and Play is a clue-finding, interactive fun game developed by Nickelodeon to entertain and educate kids aged 4 + and their families. Inspired to uplift the minds of preschoolers and help them learn, the voice app has been specially designed with concepts from child development and early childhood education. For eager players who would want to enjoy more of this can watch Episodes of “Blue’s Clues & You!”, an animated educational children’s series broadcast on Nickelodeon.

The Alexa-driven skill starts off by introducing users to a different adventure every time they launch it to play. If by any chance, players are unable to complete a storyline, the voice skill later allows those users to resume from where they left off, the next time they revisit. Therefore the ability to resume enables users not to be disappointed but to continue playing with fervor. Two other positives are the interweaving of engaging sound effects and attractive voice-over narration along with the visually appealing display of images and videos. The voice app presents ten different storylines, and kids are expected to listen along and help Josh figure out Blue’s clues. In doing so, little minds are stirred up to use their imagination and think emphatically, thereby boosting their active listening and critical thinking skills. Another highlight worth mentioning is that when the player chooses the wrong option three times in a row, the skill selects the right one thereby extending support to carry forward without losing momentum. Though what seems like a simple redirection bears oodles of positive reinforcement. To top it up, the voice app guides the conversation fairly well. Well, that being said, there seem to be a few downsides that could let down the players at times. The first one being the repetition of the entire passage when requesting to repeat the cue for going forward with the play. Another downer is that the conversation is redirected to the previous section of the narrative passage immediately after accessing the Help part for any support. This repeated narration may result in boredom making kids lose interest in progressing any further.

The VOGO Voice team scores this skill 4.6 out of 5 stars based on our rating system. Yet, you’ll have to try for yourself and see if it is a truly kid-friendly entertainment voice app that will keep their spirits pepped up while they figure out the clues listening to their favorite characters in each of the lively adventures. So why not let your kids try out the skill and see if it offers them the enriching experience you had anticipated.