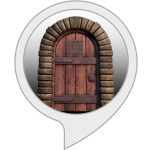 Dungeon Adventure is an Alexa fantasy game developed by Fangtastico in which Alexa dons the role of a dungeon master. The voice skill is modeled after the first edition of Dungeons and Dragons. In a nutshell, the voice app lets you create a character, fight monsters, go into combat, level up your character, purchase items from the town such as weapons, armor, potions, and spells all to save the town of Ravensburg which is under the grip of an evil necromancer and his monsters who are living in a dungeon.

The voice-driven adventure with its engaging narrative is catapulted to life by rolling dice to determine the outcomes of various tasks. To confront the various monsters the user has to buckle up by creating a character and assigning values to the character’s attributes of strength, dexterity, intelligence, constitution, perception, charisma, and wisdom. These attributes will determine how well the character will fare in the combat during the adventure and earn bonus modifiers for the users that will be added or subtracted from their rolls. Those who succeed in finding the evil necromancer and slay him will go down in the dungeon adventure HALL OF FAME. To access the robust help section the user has to say “Helpful commands” whereby all the needful insights and guidance to go forward with the game is rendered. Two other positives are the user-friendly commands coupled with the efficient handling of the conversation which offers ease of navigation within the gameplay. Moreover, the ability to resume enables users not to be disappointed but to continue playing from where they had left off. Well, that being said, there seem to be a few downsides that could let down the players at times. One of the downsides is that during certain sessions the gaming experience appears to be monotonous letting the player make no progress whatsoever. Another one being, the sessions with prolonged combats produce a rather tedious effect. Last but not least, the voice skill lacks the fluff of sound effects and character voices, the addition of which could have possibly contributed to attracting a deeper interest of its players.

The VOGO Voice team scores this skill 4.4 out of 5 stars based on our rating system. Yet, you’ll have to try for yourself and see if it is a truly mind-bending, entertaining gaming voice app that will keep you engaged and satisfied. Bear in mind to be familiar with the gaming rules so that you don’t leave defeated but be able to finish the battle and attain the joy of saving the town of Ravensburg. So why not try out the skill and see if it offers the thrilling experience you had anticipated.