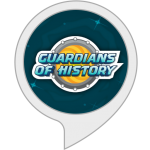 Encyclopedia Britannica’s Guardians of History is an interactive voice game where the players learn about the ancient history of Greece through an engaging time-travel adventure.

The Olympia Obstacles episode is a fun-filled adventure experience where the user travels back in time to the ancient city of Olympia to solve a mystery that could destroy the future. In short, the players learn about history with an engaging story backdrop where they need to figure out a way for helping a Greek soldier win the Olympic Games race while overcoming several obstacles. Although the game targets children, it includes various references that appeal to adults equally. The users are presented with choices to make decisions on where they want to go, and what they want to do. These decisions are supported by engaging audio and visual elements. The game’s setting, characters, story, and images are all compiled from Britannica’s historical archives to ensure that the narrative is historically accurate. It focuses on enforcing the importance of history by educating kids about past civilizations where they get an opportunity to interact with historical characters, locations, objects, and events. Out of the downsides that made to the list the first one is, occasionally, repetitive welcome messages are relayed to the user in between the game. The second one being, though the user is given choices to decide the flow of the gameplay, at times the skill tactfully prescribes a choice to progress further with the preset theme.

Nevertheless, the VOGO Voice team scores Guardian’s of History with a 5 out of 5-stars based on our review criteria. It also comes with eight alternate endings to evoke curiosity, encouraging the users to play the game over and over again. Britannica has done an awesome job by blending voice technology and subject concepts to inspire the joy of learning in kids via a new and engaging format.