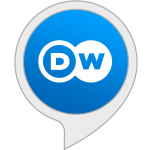 DW Learn German Quiz has been modelled by its developer Deutsche Welle to aid users to learn about Germany through quizzing sets suited to DW levels A1 and A2. The skill mainly focuses on German culture and geography including a variety of contexts. To up the game, a fine blend of sound effects coupled with the opportunity to repeat the answer along with the host in German is introduced.

The game ensues with the topic covered in the question introduced by the host in English. One of the special attributes of the skill is the adequate slowing down of the pronunciation as the question and the options are relayed in German. Users are expected to select one of the two possible choices by saying A or B.  Adding to its utility, this Alexa skill has been designed to incorporate geographical information from DW’s German courses that cater to German learners who are at levels A1 and A2. Users have the chance to improve their listening comprehension in addition to enhancing their general knowledge surrounding the country of Germany. The skill also offers the ability to resume from where one left off to elevate user experience. When giving the right answer, the learner will be probed on his interest to hear some interesting facts about the topic. The different categories explored by the skill include mountains, traffic, culture etc, all of which are packed with a fair proportion of fun to lure those who have a love for learning languages. Additionally, users are endowed with multiple chances to guess the answer which again is a plus. All in all the questions seem geared to present facts in an interesting way that piques the interest of players. The efficient handling of the conversation is another highlight of the skill. Well, that being said, there seem to be a few downsides that could let down users at times. One of the downsides is that questions and their related description are repeated in the second round of gameplay which might induce a lack of interest to revisit the skill.  Last but not least, the ‘help’ section is not steadily backed with the necessary input. It rather provides a vague outline that does not turn out to be useful especially when the user is attempting to make sense of what the skill offers and how to navigate.

The VOGO Voice team scores this skill 4.5 out of 5 stars based on our rating system. Yet, you’ll have to try for yourself and see if it is a truly user-friendly quizzing voice app that will help you assimilate the DW 1 and 2 levels of German language weaved through the eye of facts surrounding its geography and culture. For inquisitive German learners and travellers, the voice skill can be beneficial. So why not try out the skill and see if it offers the enriching experience you had anticipated.