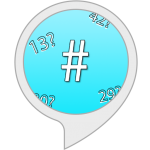 Number Guessing game, a kids’ oriented Alexa app created by Jared Higgs is a simple, edu-entertainment voice app. It is interestingly woven around the basic concepts of Math and drives young learners to use logical thinking to find the correct answer. The fun quotient that renders this app amusing is the idea of trying to guess the right answer.

The gameplay is dedicated to inspiring kids to learn basic mathematical concepts like greater than, less than, number range, counting in sequence, before and after numbers, and more. In other words, it’s a straightforward skill that nudges kids to guess the correct number that Alexa has got up her sleeve. To make it easier, Alexa provides clue after clue to help kids get closer to the chosen number. The game sets off by defining the range within which Alexa’s choice of number falls, i.e. between 1 and 100. Once the player begins guessing, Alexa hints with clues such as it is less than or greater than the number guessed. Hence it’s the clues that enable players to narrow down and guess the answer correctly. One of the highlights worth mentioning is that the skill updates on the number of guesses taken to answer correctly to pep the players up. Besides the simplicity the skill proffers in terms of its conceptualization, it’s mostly the entertaining aspect that piques the interest of kids to keep exploring the game to the fullest. Another positive is that the clues tossed to users are accurate and therefore benefit them to head towards the right answer. Well, that being said, there seem to be a few downsides that could let down the players at times. The skill does not offer the option to repeat, a basic Alexa command purposed to complement user experience. Yet another dispiriting factor is that players’ utterances apart from guesses are taken as wrong answers. The failure to differentiate between the two can lead to a flawed assessment of a player’s performance. Last but not least, the voice app presents no gamification features such as leaderboard, scoring, etc. to motivate players.

The VOGO Voice team scores this skill 4 out of 5 stars based on our rating system. Yet, you’ll have to try for yourself and see if it is a truly kid-friendly learning voice app that will help little ones to enhance their basic mathematical skills.  Bear in mind to encourage kids to actively heed clues so that they make the right guesses and ace the game. So why not try out the skill and see if it offers the educative experience you had anticipated for your kids.