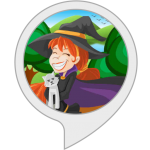 Fairy Tale Feud is an interactive kid-friendly game developed by Hero Software with a choice selection of good fairy tale creatures. The core narrative of this fun-packed voice skill is rooted in the mission to save the Enchanted Forest home to wild animals from the clutches of the Evil Witch. The game progresses through a series of contests and users partaking in it are endowed with the golden opportunity to determine the fate of the Enchanted Forest.

Winning the game entirely depends on whether or not the user manages to get 5 good creatures before the Witch. It’s a tricky yet playful strategy adopted by the game to beat her and save the Forest. The trivia smoothly kicks off by introducing the user to the captivating pathways of the Forest, while simultaneously informing them of the rules governing the gameplay. The robust Help section details the elementary idea revolving around its playability. The unarmed duel staged at every level bears the nuances of the simple rock paper scissors hand game. The Witch and the player get to choose in each turn whether to send a Giant, Wizard, or Elf into the Forest. The contest takes on a humorous overtone for the Giants are set to overcome Elves, while Elves defeat Wizards and Wizards beat Giants. After a couple of wins, the user gets a Dragon as extra help. Similarly, the player will be joined by special, engaging characters from time to time. While stepping into this realm of the game the user won’t be able to guess the Witch’s choice. If ever, either party chooses the same creature, there will be a re-contest to settle the winner of the related contest.  Moreover, the ability to resume from where left off enables users not to be disappointed but to keep playing and try their luck. The visually appealing display of images is yet another positive that attracts and retains the user’s interest in playing forward. Well, that being said, there seem to be a few downsides that could let down the player at times. The overturn of events each contest holds subtly simulates a risky gamble making it sometimes difficult to make a winning choice when choosing creatures. The other downside is that the voice app, at times, repeats the entire message in response to out-of-context words spoken by the user, thereby invoking the repeat function without having requested one.

The VOGO Voice team scores this skill 4.4 out of 5 stars based on our rating system. Yet, you’ll have to try for yourself and see if it is a truly entertaining voice app that will keep you on your toes throughout. Bear in mind to follow the simple rules so that you don’t lose out on triumphing over the Witch. So why not try out the skill and see if it offers the enchanting experience you had anticipated.