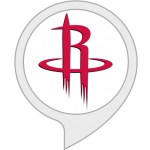 Curated to update the Rockets fans, the Houston Rockets voice app by NBA is the official Houston Rockets Alexa skill detailing every NBA season. Upped by a clear introduction and intelligible interactions, the experience seems to be fairly devoid of major defects. Intended primarily for the franchise’s fans, the skill is designed to provide alerts and streaming stats of the game in action. The users are also provided with a recap of the previous night’s action, updates on upcoming games, team headlines and so forth. Overall, it has got the relevant information to lure Rockets fans, and keep them engaged.

With the Rockets skill, users can even check the current conference standing. Touching upon key areas of interest, the skill attempts to provide team schedules, player stats, match scores, table standings, and team news. The skill has covered most of what a franchise’s fan or supporter would want to know. A downside that surfaced while reviewing was the abrupt ending of the conversations after giving the updates. On the whole, it misses a few marks to create an impactful experience for its users by leaving conversations open. After careful deliberation on the pros and mishaps, it wouldn’t be wrong to say that the skill is not as informative as it claims to be.

The VOGO Voice team scores this skill a 3.5 out of 5-stars based on our rating system. Would it be nicer if the Rockets skill notched up its product offering, and not settled as a missed free throw on the idea of attracting fans and supporters, is a fact worth reflecting upon. With all the timely alerts and critical stats, the skill strives to impress its audience, but whether or not it has been able to provide a satisfying experience for the Houston Rockets fans is yet to be fully determined. You’ll have to try for yourself to see how useful it is and whether it ticks all the right boxes.

Watch how to Leverage VOGO Voice Solutions for your Organization

If you need a voice skill for your organisation, we offer full-service solutions for your needs.

Get in touch if you would like us to review your skill or create a voice app for you.