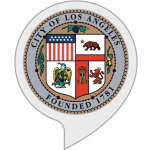 The L.A.City voice app developed by the City of Los Angeles is an initiative to connect with citizens and promote civic engagement. It offers coverage not only on the latest news and city council committee meetings but also focuses on family events that are of specific interest to the general public. Besides news and calendar events, the skill also provides details about holiday events around L.A. as well as information about city council members and forthcoming council sessions. Revolving around the interests of the general citizenry, the city of Los Angeles has taken a leap with its own Alexa skill to connect with its community and bring them a step closer to timely information.

The L.A.City voice skill has made good use of prompt and re-prompt features to enable users to interact with the skill. These response features incorporated within the skill guide users to respond accordingly so as to keep the conversion open, as needed. Instances of prompts also get repeated when the user provides an unknown input. The different category of events streamed via the voice app captures one’s curiosity but fails to live up to the expectations. The L.A.City skill elicits the user’s response regarding retrieving an earthquake report or details of an event the user is interested to know more about. But, after informing the users on the availability of such data, it requires the need for the user’s location to continue. Much along the same lines, when the user asks to listen to an episode on certain dates, the voice app becomes unresponsive soon after initiating the request to play the segment. After careful deliberation on the pros and mishaps, it wouldn’t be wrong to say that the L.A.City skill is not as resourceful as it claims to be.

The VOGO Voice team scores this skill a 3.75 out of 5-stars based on our rating system. Even so, try for yourself and see how well the skill works for you. Perhaps, you may find what you were looking for!

Watch How to Leverage VOGO Voice for Civic organisations

If you need a voice skill for your organisation, we offer full-service solutions for your needs.

Get in touch if you would like us to review your skill or create a voice app for you.