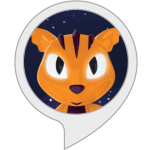 Magic Jinn is a uniquely crafted Alexa-powered voice app by Zanzoon that attempts at simulating telepathic gameplay. This interactive voice skill aims at guessing the animal that the user is thinking of by asking a series of questions. The game tries to lure its eager players by boasting to know hundreds of animals, both living and extinct, and even those that have never existed. All that is expected of the user is to answer in the affirmative as “Yes” or negate with a “No” to the questions the skill tosses at its users hoping to crack which animal is on their minds.

It’s a simple game that doesn’t prove to be nerve-racking yet at the same time imparts the right quotient of entertainment to grip the player’s undivided attention. The voice skill fascinates its users with engaging sound effects as it kicks off and progresses into the heart of the game. Magic Jinn introduces itself to its enthusiastic users as one endowed with magical powers to rightly guess any animal users can think of. Players get to bring to mind an animal of their choice and once they declare “Ok”, the game unfolds. In actuality, the skill resembles a spirited mind-reading game, eclectic variants of which are found across puzzles and apps. One of the positives worth mentioning is the engaging voice-over experience it offers besides the fact that the voice app guides the conversation impressively well especially when there is a delay of response on the user’s part. To add to it, such situations are handled with a creative outburst. Well, that being said, there seem to be a few downsides that could let down the avid players at times. In certain instances, the skill manages to repeat not the questions but other insignificant parts of the conversation causing a dip in the user experience. Another fact is that the voice skill lacks to appeal to its returning users with an attractive welcome back experience. Then there’s the inability to resume from where one left off which is yet another downer. Last but not least, certain words randomly spoken by the user can be at times read as answers by the skill and simply tosses the next question, thereby pinching out the overall fun it entails.

The VOGO Voice team scores this skill 3.75 out of 5 stars based on our rating system. Yet, you’ll have to try for yourself and see if it is an astounding gaming voice app that will keep you engrossed as you interact with the skill. The fun users get to indulge in depends on how far they can outsmart Magic Jinn and win. So why not try out the skill, see if it offers the exhilarating experience you had anticipated, and maybe try your luck at outfoxing the artful game.