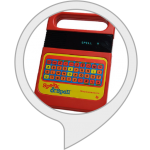 Speak Spell is an interactive, Alexa-powered educational voice app developed by Cynthia Balusek. This entertaining voice skill has been specially crafted for aspiring learners who are always on the lookout to edify themselves. Speak Spell can be a boon to parents who want their kids to build a proper English vocabulary. The Alexa app has sourced its word lists from the original Speak and Spell hardware.

This alluring game is certainly engaging as it tests the spelling of a number of commonly misspelled words. What’s more interesting is that it presents the original four levels of difficulty thereby allowing students to explore, and test their aural and learning skills. Learning to spell and helping kids retain the correct spelling is crucial to establishing a stronghold on vocabulary and so is the major focus of this voice skill. The four levels listed as A, B, C & D are to be chosen by the player to start playing the spelling game. The level of difficulty intensifies as one progresses from A to D. Overall, the game gives off the vibe of a spelling bee test that’s quite popular among kids who are eager to become a whiz with words. One of the highlights worth mentioning is that the skill allows users double chances to try their luck to spell correctly. The skill renders the correct spelling after the users spell the words they are quizzed on. Well, that being said, there seem to be a few downsides that could let down the inquisitive learner at times. The first of the downsides being the time allotted to spell is so taut that the player barely has the time to spell at a relaxed pace, thereby giving rise to occasions where the incomplete words will be judged as incorrect. All the more the words are tossed one after the other with no direction and what’s disheartening is that there are no scoring or leaderboard enticements to encourage them to keep exploring the spelling game to its fullest. Though the skill boasts of varying levels of difficulty, a clear-cut demarcation between levels ain’t that evident. Moreover, users can’t switch between levels. To add to it, there is no option to repeat owing to which users may not always be able to grasp when Alexa spells words correctly just once. Besides, in rare instances even when spelled correctly, the skill misreads as incorrect. Also, the absence of the ability to resume from where one left off seems like a big miss.

The VOGO Voice team scores this skill 3.5 out of 5 stars based on our rating system. Yet, you’ll have to try for yourself and see if it is a truly user-friendly learning voice app that will indefinitely help you master the spelling of the most commonly misspelled words. Bear in mind to spell as quickly as possible to benefit the most from “Speak Spell”. So why not try out the skill and see if it offers the enriching experience you had anticipated.