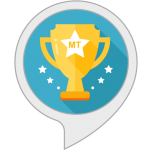 Mighty Trivia is an interactive guessing game for kids developed by Steven Bowden. This child-centered game has been crafted such that even grown-ups too can enjoy themselves by answering some fun trivia questions. What’s more, to grip the interests of both kids and adults alike, the app’s scoring is based on the speed at which the answer is guessed correctly. In this game, Alexa dons the role of an object, place, person, or animal and quizzes the user to make guesses based on the hints provided. Designed for a solo player, the game is set up with 5 hints per question and for each question, three guesses are allowed.

One of the exciting features of this voice skill is the stock of unfamiliar questions it comes up with on a variety of topics. To top it up, it peps up the player’s quotient of creative thinking with mind-boggling clues. To score big on the Mighty Trivia Leaderboard, users have to guess what Alexa is pretending to be and answer their way through the randomly chosen questions. The game is endowed with three levels of difficulty but to progress further up the user requires to pass the fixed scores at each level. The third-most level will continue until all questions are exhausted. The game round ends when all 3 attempts to make the right guess have been used up. Subsequently, the player will be notified of the total score and ranking on the leaderboard. The points are solely based on how fast the user correctly answers, the number of hints required, and the game level. When users remain stumped even after their first guess, all they need to say is ”Another hint” to receive the next clue and try their luck at guessing the right answer. If the score earned is high enough it will be displayed for 24 hours on the global leaderboard at mightytrivia.com. Another feature worth mentioning is that the voice skill efficiently handles the conversations. All the more, the option to resume the skill from where the user had left off is yet another positive. Well, that being said, there seem to be two downsides that could let down the player at times. The fact that the skill lacks the option to repeat is a bit of a downer. Last but not least, users have to switch to a subscription package and choose from either of the two premium modes i.e. Tournament or Multiplayer, in case the player wishes to play the advanced levels.

The VOGO Voice team scores this skill 4.6 out of 5 stars based on our rating system. Yet, you’ll have to try for yourself and see if it checks all your expectations and lets you step into a bubble of exhilaration while you make those mind-bending guesses and enjoy its freebies. So why not try out the skill and see if it offers the engaging experience you had anticipated.