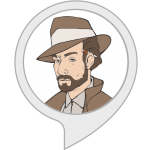 My Mission (Detective Game Part I & II) is an imaginatively creative Alexa skill developed by NordicSkills. Its innovative take to offer users the chance to be the detective or rather the voice in the head of the investigator seems interesting enough to lure the audience-driven to this thrilling genre. The voice integrated Alexa detective game offers players the golden opportunity to take the lead role of Steven Brown, a private detective, and control his actions by using their voice.

My Mission voice app builds its narrative with dual characters, namely Steve and his assistant to piece the missing facts and solve the mysterious cases together. The two-part missions contained in this skill are ‘The nobility’ and ‘Professor Schwarz’. The third in line is soon to follow as updated on their promotional skill’s page. The only way to win the game is via a single solution for which not every path is required to be attempted. An ear to the details unraveled is crucial to the speedy resolution of the case. Users are encouraged to pay undivided attention to the slightest of specifics and statements so as not to miss the most significant clues intertwined with the narrative. One of the outstanding highlights of this gameplay is their generous offer to players inciting them to solve two detective cases. Some of the other positives are the engaging voice-over and sound effects to enliven the conversation. Moreover, the voice skill renders a handful of useful commands to boost user engagement. Additionally, the efficient help section is backed with resourceful commands, some of which are skip, go back, where am I? backpack, and inventory commands. The skill offers users the ability to resume from where they left off so as not to let users lose momentum or feel discouraged when they revisit the game to play again. Well, that being said, there seem to be a few downsides that could let down the players at times. The first one is the lengthy and monotonous take of the conversation at certain turns of the narrative. Another downer is that the user’s change of choices does not produce a game-changing effect in the course of action that follows subsequent to the paths chosen.

The VOGO Voice team scores this skill 4.2 out of 5 stars based on our rating system. Yet, you’ll have to try for yourself and see if it is an interactive gameplay that will send shivers down your spine and build high anticipation as you strive to solve the cases. Bear in mind to familiarize yourself with the commands to make the most from playing My Mission. So why not try out the skill and see if it offers the thrilling, one-of-a-kind experience you had looked forward to.