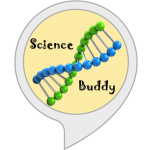 Science Buddy is an interactive voice application developed by Neil Chowdhury to help kids learn about science. The making of this fun trivia game was inspired by the National Science Bowl, an academic competition run by the U.S Department of Energy. The skill also garnered the title of finalist in the 2018 Alexa Skills Challenge for kids and also won the Bonus Prize in the category of Best Skill by High School Students aged 13-18 in the US/Canada.

What makes this voice skill popular is the inclusion of easier questions suited to the learning ability of kids in elementary school ranging from 3rd to 5th grade. The quizzing kickstarts with a series of ten multiple-choice questions sourced from a variety of science topics. The user gets to choose the right answer by picking one of the three given options, namely A, B, and C. All the more, the skill has the built-in ability to remember the questions the users quit midway through a game. As a result, the next time the user plays the game, the skill allows them to start off exactly from the question they had left off on. This definitely comes in handy to learners who are eager to try out the skill more than once. Another positive worth mentioning is that the voice app manages to efficiently guide the user throughout the conversation. At the end of the game, the total number of questions the player answered correctly is announced. To add to it, there are no limitations on the number of times the user can attempt to play the game in a single day. Last but not least, the questions tossed in the second round bear no repetition whatsoever, which comes off as a real boon for curious learners. Well, that being said, there seem to be a few downsides that could let down the learner at times. One being, the inability of the skill to distinguish unrelated words from the actual answer and subsequently marking down the out-of-context words uttered by the user as the wrong answer. The other being the improper and partial display of the content along with an unfitting font, which is disappointing for users with an Echo Show.

The VOGO Voice team scores this skill 4.4 out of 5 stars based on our rating system. Yet, you’ll have to try for yourself and see if it is a truly user-friendly learning voice app that will engagingly teach your kids a variety of science topics. What’s more, is that the questions are easy and not a tad tricky. So why not try out the skill and see if it offers the enriching experience you had anticipated.