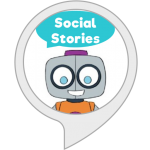 Social Stories (Creating a Story) is a fun, interactive voice app created for kids by SayKid. Almost recently, SayKid and VOGO Voice nabbed the judge’s choice and people’s choice award respectively in the Alexa EdTech Skills Challenge launched by AWS. Dedicated to transforming education through voice technology, SayKid attempts through the making of this voice app to spark creative thinking and encourage a safe, natural, and engaging experience for kids. With the mission to reduce the impact of screens on young brains, SayKid’s Social Stories voice app rises to the occasion of nourishing creativity tagged by the desire to keep kids off screens.

Social Stories voice skill kickstarts by enabling kids to design stories solo or as a group with the help of a robot. To further pique the interest of those who play solo, the robot ferrets out the details about the player’s hobbies to render a more immersive experience. To delight the users even more, the players are endowed with the privilege of choosing the protagonist’s age, gender and timeline while the robot decides on the protagonist’s name and the place of the plot’s setting. The voice app also makes prudent use of sound effects in the backdrop to heighten the sensory involvement of the user as the plot is narrated. Moreover, there is the option to repeatedly play the story, in case the user experiences a bout of irresistible fascination towards the storyline created. Another feature worth mentioning is the voice skill’s intuitive responding to the user’s random voice commands and its efficient guiding of the conversation. That being said, there are a few downers that made it to the list, first of the lot being the numerous questions to be answered; the second being a mild decline of quality in stories upon repetitive attempts to design plots with the third one being the turn off where there’s no option for the user to resume from where left off thereby having to start from scratch.

The VOGO Voice team scores this skill a 4.25 out of 5-stars based on our rating system. Yet, you’ll have to try for yourself and see if it really educates kids on the different story elements and its creation in the fun, and engaging way it boasts of; and whether it offers the immersive experience you had anticipated.