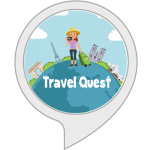 Travel Quest is an adventure-oriented educational game curated by Universatile to help students explore countries in a fun and engaging manner. The voice skill attempts a dual purpose to entertain and educate kids by putting forth the opportunity to learn about the cuisine, geography, landmarks, leaders, events, festivals native to different countries such as Japan, Canada, France, Brazil, Egypt and Australia. Though this travel exploration game has been designed for kids aged 13 and under, adults too are more than welcome to check out the interactive gameplay.

Players who partake in this adventure styled game receive a passport along with a choice of countries to explore. One of the striking features incorporated within the skill that is worth mentioning is the inclusion of creative sound effects to heighten the user’s experience. For instance, while describing Canada the sound of the Niagara waterfalls is coupled along with the narration hosted by a character named Jenny. Another equally significant standout feature is the profound travelogue experience the voice skill strives to simulate. One other positive that made it to the list was the ability to level up based on the choice of countries explored. To add to that would be the fact that children won’t leave disheartened if they were to answer incorrectly, as the round of questions continue till the right answer is issued forth. To entice the kids further, the gameplay offers the chance to garner points in the form of doubloons while increasing their levels, which in turn entitles them to take part in the limited edition event to grab collectible characters like Gladiator and similar other distinctive characters unique to Travel Quest. Additionally, upon securing gold doubloons the player earns a ticket to play the bonus game, “Who, What, Where?”. That being said, there were a few downsides that were noted like being unable to change the country while exploring a country in addition to the limited number of countries to explore. Another hiccup that surfaced was when the voice skill stopped functioning while revisiting too often; and the last of the lot was faced when the voice app failed to recognize certain spoken requests as well as guide the user appropriately.

The VOGO Voice team scores this skill a 4.25 out of 5-stars based on our rating system. Yet, you’ll have to try for yourself and see if it is truly an effective educational skill for kids aged 13 and under, and whether it checks all the boxes of an adventure-style game as well as offer the engaging experience you had anticipated.