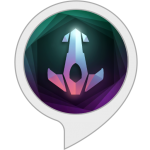 The Vortex is an immersive sci-fi space adventure game specially designed by Doppio Games. With a rare and exciting plot, the makers of this voice app attempt to take gaming to the next level. The interesting mix of an engaging voice game with its mysteriously attractive storyline endows the skill with a richer gaming experience.

The gameplay kicks off with the player awakening in a cryogenic freeze. Trapped in a cryogenic vortex within a strange spaceship, the player has no other option but to resort to the help of robot assistants to survive the potentially dangerous situation. Caught up in a paralytic state, the player is forced to act out through the eyes and hands of the robot assistants in the form of voice commands. The equal parts of story-telling, adventure, and role-playing alongside interactions with characters hold the ability to amplify the rush gamers get. This carefully developed gameplay offers a situation-oriented “Help” support backed by efficient cues and guidelines for users to tackle the mission at hand. To enrich the gaming experience, the developers have hyped the narrative-driven plot with engaging sound effects and an exceptionally good voice-over experience. High-end display and design elements are also incorporated to aptly complement the voice-over. The display experience seems to be integrated to enliven user responses especially those with access to Alexa-enabled devices with screens. What’s more, the ability to resume from where one left off adds to the beneficial aspect of the skill. Besides, the skill efficiently guides the conversation. Well, that being said, there seem to be a few downsides that could let down the user at times. One of them being the slow-paced strategy the gameplay has adopted to keep the plot moving. Another downer is that sometimes the skill fails to appropriately recognize the user’s response, owing to which situations arise wherein the player becomes unable to navigate the skill. Last but not least, users have to recourse to in-game purchases to get through the story more quickly. Only by means of the purchases can the user lower the hours of wait time and survive the vortex which otherwise would be next to impossible.

The VOGO Voice team scores this skill 4.4 out of 5 stars based on our rating system. Yet, you’ll have to try for yourself and see if it is an exceptionally interactive voice app that explores the ultra levels of gaming experience. Anyone who is a sci-fi gaming adventurist would greatly enjoy what this voice skill has to offer. So why not try out the skill and see if it offers the immersive experience you had anticipated.